In Toronto, BSL resulted in a dramatic increase in serious dog bite-related incidents and by contrast in Calgary, comprehensive breed-neutral regulations significantly reduced the number of bite-related incidents. Given the data, the public safety impact of BSL compared to modern breed-neutral regulations is clear:
Sources: Global News (Toronto) | Montreal Gazette (Calgary)
​In the graph below, the green line shows the increase in dog bite incidents in Toronto after BSL was enacted even as the pitbull-type dog population declined due to the ban (purple line): 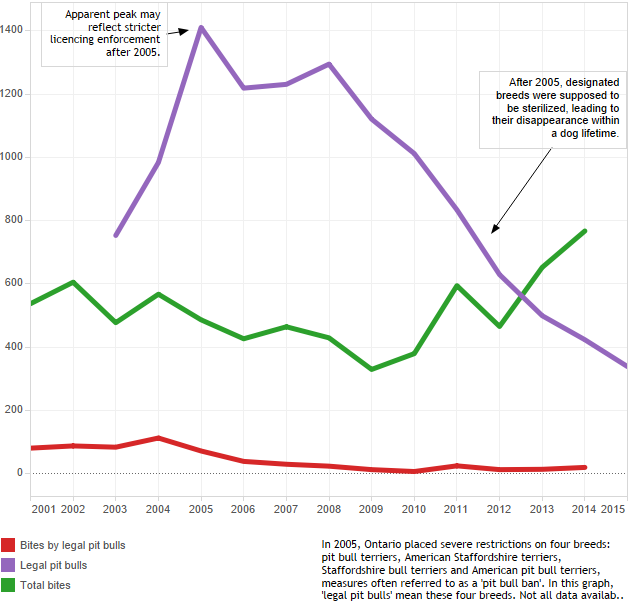 Regardless of any personal opinions about specific breeds (or types) of dogs, appearance-based dog bans such as BSL are proven to be ineffective by multiple peer-reviewed studies and also in practice. The dog bite statistics in Toronto and Calgary provide clear evidence of the difference between archaic, breed-specific regulations and modern, breed-neutral regulations that are more effective because they address all potentially dangerous dogs, all irresponsible owners, and all unsafe dog-related situations - regardless of a dog's appearance or breed. Furthermore, BSL is a waste of public resources as it diverts valuable public funds and resources away from factors and situations that are directly and scientifically linked to public safety and dog bite incidents such as irresponsible owners, abuse and/or neglect, and aggressive or problematic dogs (of any breed). Even worse, BSL is discriminatory towards responsible owners and punishes dogs based solely on their appearance or assumed breed, sometimes resulting in the seizure of loved pets that have done nothing wrong. Consequently, it's really no surprise that BSL is a trend in decline as over 70 cities in the U.S. have repealed bans or BSL since only 2018 - which is not only great news for responsible owners and many wonderful dogs, but also for public safety.
Updated: November 18, 2022